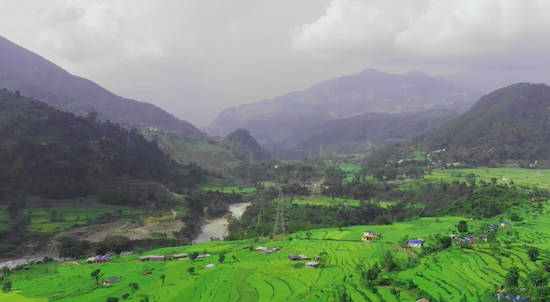 LAMJUNG DISTRICT, NEPAL, 27 October 2021 – Tomorrow, Indigenous and local community members from across Lamjung District in Nepal will meet with representatives from the European Investment Bank (EIB) for a dialogue regarding the EIB-funded Marsyangdi Corridor transmission line project, which is harming their land and livelihoods. The bank contributed €95 million (US$110 million) to the Nepal Electricity Authority (NEA) as part of a broader investment in the Nepalese hydropower sector, but the project violates the EIB’s own social and environmental safeguards and the finance contract between the EIB and NEA. With inadequate information disclosure and an insufficient consultation process, community members fear that continued construction of the transmission line will threaten their livelihoods, devalue their land, harm their community forests, and destroy their way of life.

“We suffered a lot and we are likely to face loss. Meanwhile, we are likely to become squatters. Neither can we leave our things here and go away, nor can we live here serenely.” – Ashamaya Tamang, affected community member from Khudi in Lamjung District

Affected community members demand that the EIB suspend project construction and recognize their right to free, prior, and informed consent (FPIC): an Indigenous community’s internationally-recognized right to either accept or decline a project that affects them. Although this right is codified in the EIB’s own safeguards, the EIB’s independent Complaints Mechanism found in April 2021 that no FPIC process was conducted. At tomorrow’s dialogue, the EIB must hear community members’ concerns and respect their demand to suspend the project until the communities’ right to FPIC is recognized.

“Transmission Tragedy” is a video produced with our partners at the Lawyers’ Association for Human Rights of Nepalese Indigenous Peoples (LAHURNIP) and Indigenous Media Foundation. Please watch to learn more about what this project means for the communities facing a life beneath high-voltage power lines, and to join the call for the EIB and NEA to uphold their commitments.