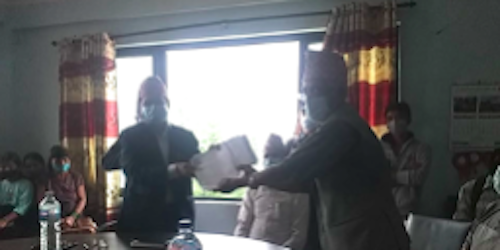 KATHMANDU, September 8, 2021 – Communities in Western Nepal are taking action to challenge forcible land acquisition by an EU-funded hydropower project that was recently condemned by an official, independent investigation of the European Investment Bank (EIB).

On 8 August, 2021 dozens of local landowners and community members submitted a petition to the Ministry of Home Affairs via the Chief District Officer of Lamjung District challenging the government’s continued land acquisition for the Marsyangdi Corridor transmission line project, being built over homes, lands, forests, and community spaces to transfer electricity produced near the Annapurna Conservation Area down to the Kathmandu Valley. The petition demands the project be suspended and only proceed after a Free Prior, and Informed Consent (FPIC) process, which is required under international law and the EIB’s rules.

“Communities will not sit idly by as the Government continues land acquisition and construction activities for the EIB-funded transmission line, while keeping them in the dark about the project and its impacts,” said Chandra Misra, Secretary of the FPIC & Rights Forum, consisting of communities advocating for a rights-based approach to hydropower development.

“The EIB and Nepal Electricity Authority (NEA) must immediately suspend this project and commit to an FPIC protocol designed by communities,” said Khem Jung Gurung, Chairperson of the FPIC & Rights Forum.

In April 2021, the project was condemned by the EIB’s own Complaints Mechanism, which found it is being forcibly constructed without adequate environmental and social assessment and had major flaws in its public consultation processes. The Mechanism found that a mandatory FPIC process was not conducted and the Bank provided funding to the NEA even though conditions for EIB financing were not fulfilled, including that resettlement issues be resolved prior to construction. Ultimately, it recommended the Bank suspend funding until credible progress is made to address the violations.

Despite this strong condemnation, project activities on the ground have not been suspended to date and the NEA’s Annual Report published in August 2021 states that the transmission lines and associated substations of the Marsyangdi Corridor project are expected to be commissioned by the end of the 2021/22 fiscal year. 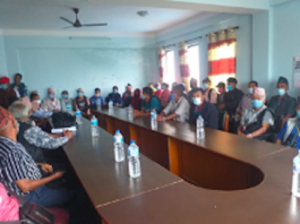 “The continuation of this project more than 4 months after a damning investigation makes a mockery of the EU’s commitments to human rights and accountability,” said Anirudha Nagar, Communities Director at Accountability Counsel, which is supporting communities. “The EIB has invested hundreds of millions of euros in Nepal’s energy sector and must exercise all possible leverage to suspend the project and address the violations.”

While the practice in Nepal is to only provide 10 to 20 percent compensation for land use restrictions under a transmission line’s right of way, the Complaints Mechanism recommended a more flexible and transparent approach based on best practice whereby actual impacts are assessed on a case-by-case basis.

“Landowners, including those who will be economically displaced under the line’s right of way, are unwilling to accept meagre compensation for this project,” said Advocate Shankar Limbu from Lawyers’ Association for the Human Rights of Nepalese Indigenous Peoples (LAHURNIP).

Communities expect the FPIC process will resolve the current tension between affected communities and project authorities.