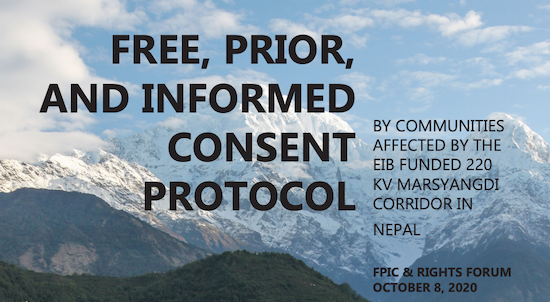 KATHMANDU, 8 October 2020 – Today, Indigenous communities affected by the 220 kV Marsyangdi Corridor transmission line in Nepal call on their government and the European Investment Bank (EIB) to seek their Free, Prior, and Informed Consent (FPIC) in accordance with a protocol they are releasing detailing the FPIC process.

“The Nepal Electricity Authority (NEA) and EIB must halt all project-related work until Indigenous Peoples give their consent,” said Khem Jung Gurung, Chairperson of the FPIC & Rights Forum, comprised of communities from Lamjung and Manang districts.

Two years ago, on 8 October 2018, communities filed a complaint to the EIB’s Complaints Mechanism documenting that project authorities have left communities in the dark about the transmission line, its various impacts and the route of the line. The complaint outlined the environmental impacts arising from deforestation, loss of community resources, disruption to wildlife, health and safety impacts, cumulative impacts from associated hydropower projects, and economic impacts, including insufficient compensation to landowners under the line’s right of way.

“It has been two years since we filed a complaint to the EIB, and the right to FPIC and meaningful consultation continues to be violated,” said Chandra Misra, Secretary of the FPIC and Rights Forum.

According to the EIB’s standards, an “FPIC process should produce a clear endorsement or rejection by the Indigenous Peoples concerned of the proposed intervention and a statement of all accompanying mitigating and remedial measures and benefit-sharing agreements”.

That clear endorsement is wholly lacking in this project.

“If it is genuine about its commitments to FPIC, the EIB must urgently intervene in this project,” said Anirudha Nagar, Communities Director at Accountability Counsel, which is supporting communities on the EIB Complaints Mechanism process. “The FPIC protocol provides concrete guidance to the EIB and NEA on designing an FPIC process, including by providing communities the opportunity to understand, input, and consent to the transmission line’s design, route, impacts and mitigation measures.”

Developed through intensive consultations with communities, the FPIC protocol comprehensively outlines the steps that project authorities must take, including sharing all project information in languages Indigenous communities understand, ensuring an environment free of coercion, and fully abiding by whatever decision Indigenous Peoples reach, including the decision to refuse consent or to withhold their decision until a later date. In some project-affected areas, the community comprises a mixed population of both Indigenous and non-Indigenous Peoples living together, especially Dalit and Bahun-Chhetri people. Therefore, the protocol also includes steps to achieve “broad community support” through information disclosure and meaningful consultation, as required under the EIB’s standards for non-Indigenous Peoples.

“It is important for women to be part of the FPIC process given the many impacts transmission lines have on them,” said Dudha Kashi Gurung, Chairperson of the Nepal Federation of Indigenous Nationalities (NEFIN-Lamjung), who took part in consultation meetings to develop the FPIC protocol. “The protocol takes steps to ensure women are included in the decision-making process, including by requiring authorities to correspond with the local Mother’s Group when providing notice to villagers about community-level meetings.” 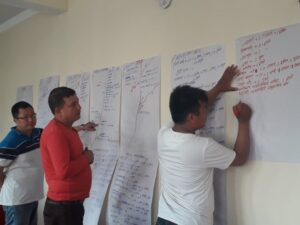 “For decades, Indigenous Peoples in Nepal have faced discrimination and opposition in the face of their fundamental rights and calls for self-determination,” said Shankar Limbu from the Lawyers’ Association for the Human Rights of Nepalese Indigenous Peoples (LAHURNIP), which is supporting the communities. “The EIB and NEA have failed to assess the project’s impacts on Indigenous Peoples and must immediately correct that by conducting a robust study in consultation with Indigenous rights experts.”

Nepal has adopted UNDRIP and is party to International Labour Organization (ILO) Convention 169. The Constitution of Nepal, under Article 51(b)(3) and 51(j)(8), commits to implementing international treaties and agreements to which Nepal is a State party, and to ensure Indigenous Peoples their right to dignified life, identity, and participation in decision making processes that concern them.