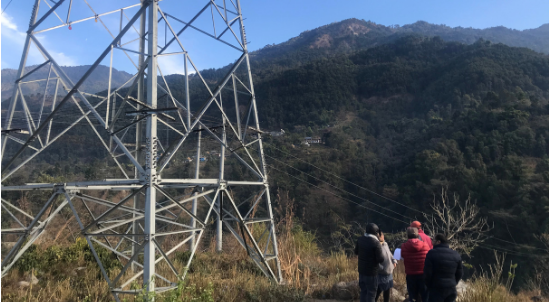 (Lamjung District, Nepal, March 20, 2019) — The European Investment Bank (EIB)’s independent watchdog – known as the Complaints Mechanism – visited the Lamjung district of Nepal from March 15 to 18, 2019, to hear concerns of communities affected by the EIB-funded 220 kV Marsyangdi Corridor, a high voltage transmission line project which is being implemented by the Nepal Electricity Authority (NEA). The Head of the Complaints Mechanism, Ms. Sonja Derkum, and their most senior mediator, Ms. Lurdes Serra, visited five locations in Lamjung district which covered about 40 km of the transmission line, including portions passing through the Annapurna Conservation Area.

Over the 4 days, about 700 affected community members came to meet directly with the representatives from the Complaints Mechanism. Women, men, elderly people, and young people – from different Indigenous, Brahmin and Dalit communities – raised their hopes and fears about the project, including its potential impacts on their lands, livelihoods, health and safety.

“Since the 220 kV Marsyangdi Corridor is being built on the traditional lands of the Indigenous Gurung people, it must secure the Free, Prior and Informed Consent (FPIC) of local Indigenous peoples, and other affected communities, before it goes any further,” said Mr. Durga Yamphu Rai from the Kathmandu-based Lawyers’ Association for Human Rights of Nepalese Indigenous Peoples (LAHURNIP). LAHURNIP is supporting Lamjung communities affected by the 220 kV Marsyangdi Corridor, and other hydropower sector projects, to raise their voices to the government, project authorities, and financiers. These projects are failing to comply with the international law such as the UN Declaration on the Rights of Indigenous Peoples and International Labour Organization Convention No. 169, and existing Nepali laws, which create legal rights to information disclosure, consultation, participation in decision-making, and FPIC, especially in matters related to land, resources, health, environment, and culture.

The communities in Lamjung district have organised together as the FPIC & Rights Forum, an umbrella organization of numerous village-level Struggle Committees, to demand that hydropower sector projects in their region respect their rights. The FPIC & Rights Forum filed a complaint to the Complaints Mechanism in October 2018, requesting them to provide a mediation between, on one side, the affected communities, and on the other side, the EIB’s management, the NEA, and relevant Nepali government authorities. After finding the complaint admissible, the Complaints Mechanism conducted this “initial assessment” visit in order to hear the perspectives of the various parties to determine if a mediated solution is possible.

“Affected communities in Lamjung district are looking forward to engaging in a mediation process with all the relevant parties as soon as possible in order to find constructive solutions to their concerns,” said Mr. Chandra Mishra, secretary of the FPIC & Rights Forum.

“EIB management approved the loan and released funds without ensuring its environmental and social rules are being followed. Now, it must sit on the mediation table with local communities, and help find solutions to the problems its loans have contributed to,” said Mr. Khem Jung Gurung, coordinator of the FPIC & Rights Forum.

The Complaints Mechanism informed communities they will release an initial assessment report in May 2019, after speaking with all key parties, including the project promoter and relevant government authorities. The report will propose a way forward regarding the communities’ complaint.

“Given the urgency of the communities’ issues, we are hopeful the Complaints Mechanism will issue its initial assessment report on time, and offer a robust process to help resolve the affected communities’ concerns and remedy violations of the EIB’s environmental and social rules,” said Accountability Counsel, an organisation supporting the communities on the complaint process through technical and legal advice.