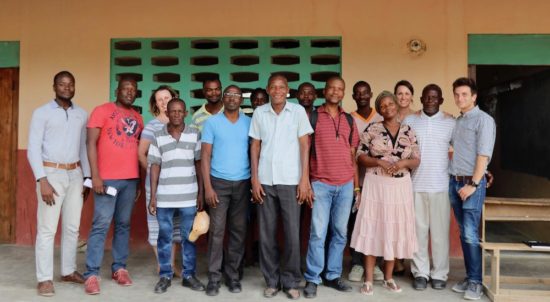 Caracol, Haiti — On December 8, 2018, hundreds of Haitian farmers and their families, representing nearly 4,000 people, reached an historic, negotiated agreement with their government and a development bank concerning the taking of their farmland for the Caracol Industrial Park in 2011. The agreement provides for remedial support with a combination of land, employment opportunities, agricultural equipment and training, and support for micro-enterprise focused on women and the most vulnerable members of the community. “After my land was taken from me, we women have been in a difficult situation. We’ve had no income for crops we used to sell. We didn’t see any future. With the agreement we signed yesterday, we hope our lives will be changed,” said Seliana Marcelus, one of the farmers and lead negotiators.

Originally fast-tracked as part of reconstruction following the 2010 Haitian earthquake, the export-oriented project, financed by the Inter-American Development Bank and U.S. Agency for International Development, was sited on some of the most arable land in  Northeast Haiti. The farmland, which was not affected by the earthquake, had been the support system for up to 4,000 Haitians. The land provided food crops that were an integral part of the local food economy in Northeast Haiti.

“Finally, today, we have written a page in the history of Haiti. This is the first time that Haitian farmers have stood up and been listened to,” said Milostene Castin, Coordinator of AREDE, the local organization supporting the farmers. The impacts on those who lost their farmland with no more than a few days’ notice have devastated those families, who still eight years later are struggling amidst their severe losses. Women are disproportionately harmed by the impacts, with increased financial and food insecurity, girls out of school whose families can no longer afford school fees, and reports of increased gender-based violence. 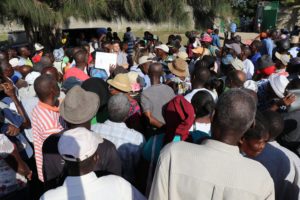 The Kolektif meets to discuss the details of the final agreement

Farmers had filed a complaint in January 2017 to the accountability office of the Inter-American Development Bank, one of the major funders of the Industrial Park. The negotiation that resulted was facilitated by the Bank’s Independent Consultation and Investigation Mechanism, or MICI in Spanish, which was designed to receive complaints by people harmed by the Bank’s activities.

Prior to filing the complaint, hundreds of displaced farmers and their families organized into a collective, the Kolektif Peyizan Viktim Tè Chabè. The Kolektif’s devoted leadership group worked daily, on top of their efforts to provide for their families amidst their losses, to achieve this victory. “ActionAid, in its effort to support communities, found the Kolektif to be a model of resilient community organizing, with women and men at the center of defending their own rights. We are privileged to accompany and continue working in solidarity with these communities,” said Yolette Etienne, Country Director of ActionAid Haiti.

The negotiation process that led to today’s agreement included a year of meetings between the Kolektif and their advocates, representatives of the Bank, and representatives of the Haitian government with facilitation by the accountability office. It included information sharing about impacts of the Industrial Park, and detailed, technical surveys to capture the losses of farmers and their families.

The implementation process that comes next will be the test of the power of the agreement and the commitment of the parties. “This is an incredible agreement, but its ultimate impact will require strong multi-party oversight. We will continue to support the Kolektif’s exceptional leaders through this critical phase to come,” said Lani Inverarity, the lead lawyer at Accountability Counsel who supported the Kolektif throughout the dialogue process. 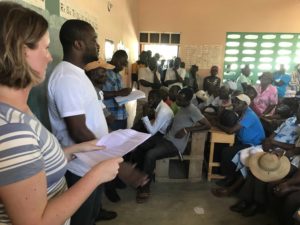 AC’s Lani Inverarity discussing the agreement with the Kolektif of displaced farmers and families.

“This case is already serving as a model for our work elsewhere in the world, where communities are working to address deep power imbalances and harm from international investment through dispute resolution.”

Throughout the complaint process the Kolektif had the support of Accountability Counsel, a global, non-profit organization that specializes in supporting community-led dispute resolution; ActionAid Haiti, the local affiliate of ActionAid, a global movement of people working together to further human rights and defeat poverty; and the strong local leadership of Action pour la Reforestation et la Défense de l’Environnement (AREDE), a Northeast Haitian organization working to protect the environment, and fighting social exclusion, poverty, and land grabs. According to Eva Jean Baptiste, a farmer who led negotiations, “with the help of our advisors and with the cooperation of the Bank and the Haitian Government, we have an agreement that will restore our livelihoods. We are human beings and all of us need livelihoods to survive.”

A summary of the agreement is available in English, French & Creole.