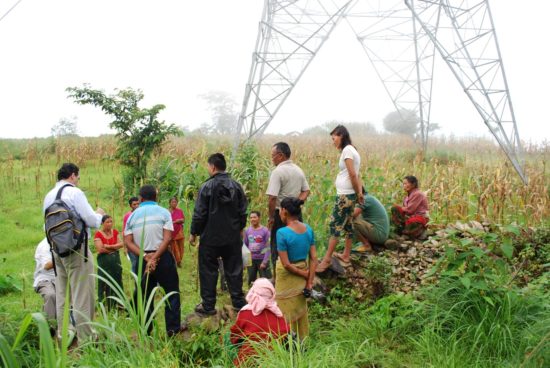 The World Bank finally released a report by international dispute-resolution expert, the Consensus Building Institute (CBI) late last week. The CBI report sheds new light on ways to prevent the “proliferation of conflicts” that had been occurring in Nepal between local communities and government authorities over the siting of infrastructure, especially high voltage power transmission lines. Nepal plans to build about 4,000 km of new transmission lines by 2040. However, CBI observes that many of these projects have been delayed or stalled for extended periods, “resulting in substantial financial losses for state and private power producers and significant economic and social impacts in communities.”

The World Bank had hired CBI in early 2016 to produce the report as a direct response to the dispute between the Nepal Electricity Authority (NEA) and local communities in Sindhuli district affected by the bank-funded Khimti Dhalkebar transmission line (KDTL). The Sindhuli communities had filed cases at the Nepal Supreme Court and National Human Rights Commission, and a complaint with the bank’s independent complaints office, the Inspection Panel, in 2013. CBI also examined conflicts in other World Bank funded transmission lines in Nepal, and submitted its report to the bank in September 2016.

The CBI report acknowledges the Inspection Panel’s findings that there was a lack of consultation, information disclosure, and supervision throughout the planning, design, and implementation of the KDTL project, which was among the root causes of the conflict on the ground, and resulted in police violence, imprisonment, and threats of criminal sanctions. CBI states: “our own inquiry found strong disagreements over the adequacy of consultation in all its dimensions — timing, methodology, location, language, attitude and availability of policy-relevant and site-specific information — not only in Sindhuli but also at the other two project sites visited. Nearly everyone we spoke to affirmed that the escalation in Sindhuli could have been avoided with significantly greater transparency and willingness to engage.”

The CBI’s report makes clear recommendations to the bank and Nepali authorities. In the short term, there is an urgent need for reform which will help “prevent and mitigate conflicts with communities over the routing of electricity transmission lines and the level of material benefits.” This reform should be grounded in an “evidence-based national narrative around energy development in Nepal that recognizes its potential benefits as well as key distributional questions.” The report also makes other recommendations for institutional reform for the NEA and the sector.

Advocate Shankar Limbu, Secretary, Lawyers’ Association for Human Rights of Nepalese Indigenous Peoples, which provides legal aid to Indigenous and other local communities affected by infrastructure projects, said: “The CBI report confirms that when Nepal ratified ILO Convention No. 169, it assumed a series of obligations regarding projects affecting indigenous lands and resources. Yet, there is no specific legal or policy framework in place on how to implement these commitments. Indeed, the government and hydropower sector projects are failing to comply with the constitutional and legal framework which grants Indigenous peoples and other local communities’ space for consultation and participation. As a result, you see conflict because communities are demanding collective rights in a governance context which is failing to recognize such claims.”

Mr. Siddharth Akali, South Asia Consultant, with Accountability Counsel, a San-Francisco based organization that supported in drafting the access to information applications, said: “The CBI Report makes pragmatic yet ambitious recommendations about addressing conflicts in Nepali transmission lines. International financiers have a role to play to  support the NEA and the Nepali authorities to draft and implement a clear and up-to-date right of way policy that will set their projects up for success.”

The report’s release is a vindication of civil society calls for greater transparency at the World Bank after it refused disclosure for two years under its protracted access to information process. After repeatedly asking bank management for the report for a full year, organizations supporting the Sindhuli communities pursued the World Bank’s access to information process including an initial request, and two levels of appeal, while also applying public pressure. The campaign was ultimately victorious when after fourteen months, the Appeals Board – consisting of three independent, outside experts – decided that the bank was improperly restricting access to the report. This was the third time the Appeals Board has granted disclosure since it was formed nearly a decade ago, during which period it has decided on ten cases.

Civil society is calling on the bank and the CBI to translate the report to Khas Nepali and make it part of the national conversation about hydropower sector development. Community members from Sindhuli made time to meet with CBI, offer inputs for their report, and show them the site of the project. It’s only fair that local communities affected by transmission line projects be able to access the final report in their own language.