Haitian Farmers Demand “konpansasyon jis” for Loss of Land: How We Are Working to Make This a Reality 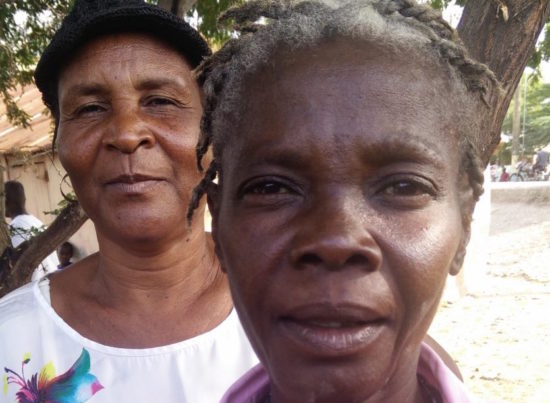 Our attorneys, Lani and Stephanie, recently returned from Caracol, Haiti where they supported the Kolektif Peyizan Viktim Tè Chabè, a collective of hundreds of Haitian farmers, in their complaint against the Inter-American Development Bank. As we have previously reported, in 2011, more than 400 farmers and their families were forced from their agricultural land to make way for the bank-funded Caracol Industrial Park. The farmers were displaced without consultation or any prior assessment of the impacts on them. They waited almost three years for promised replacement land, only to be told that most families would instead receive an inferior and inadequate cash compensation package. Almost all of those families now struggle to meet their basic needs.

Together with ActionAid Haiti and local partners, Lani and Stephanie helped the Kolektif prepare for the first site visit by the Bank’s accountability mechanism, the Independent Mechanism for Consultation and Investigation (MICI). Lani and Stephanie traveled to Caracol and met with as many as 400 victims of the displacement to explain the MICI process and to help them organize and strategize in advance of MICI’s arrival.

Throughout MICI’s three-day visit, the Kolektif powerfully conveyed their concerns. They spoke repeatedly of the rich life that the land provided their families, as their primary source of income as well as food. The land was their wealth. It gave them everything they needed; it was their “mother and father” and “the air we breathe.” One young woman described, in tears, that the land and its crops were cultivated and left to her by her father, who passed away. Every day when she visited the land, to obtain food for her family, she saw him in the trees and the fruit. Without her father and without the land, she now struggles to take care of herself and her family. Others spoke of children no longer attending school because their parents cannot afford it, of their very real fears that the impacts of the loss of the land will be suffered by multiple generations. One man went from having land that supported over 100 seasonal workers during harvest, exporting his produce all over Haiti, to having no income-generating activities at all today.

The Bank’s development mission and its safeguards should prevent such a tragedy. Our new brochure, “Livelihoods Lost”, sets out the various ways in which this resettlement and compensation process went badly wrong. “We need fair compensation,” explains Seliana, one of the leaders of the Kolektif, “that can be a sustainable source of income for our children and the children of our children.”

Despite bank management’s attempt to limit the scope of the complaint process, MICI has concluded that all of the issues raised are eligible and it has initiated the next phase in the complaint process: an assessment of whether a dispute resolution process is viable. Over the next two months, MICI will be meeting with the Kolektif, the bank and its client, the Haitian government, to determine whether they are willing to participate in facilitated dialogue in which they could directly negotiate a solution to the Kolektif’s concerns. We will be working with the Kolektif to make a fair and effective dialogue process a reality.

For more information about the complaint and the issues it raises, see our Haiti case page.