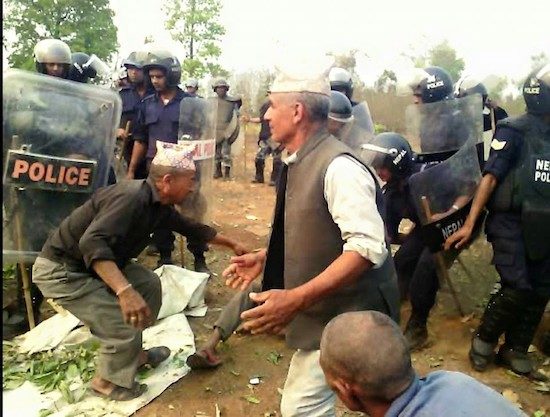 Accountability Counsel along with Lawyers’ Association for Human Rights of Nepalese Indigenous Peoples (LAHURNIP) sent an open letter to World Bank President Kim on behalf of communities in the Sindhuli district of Nepal affected by a World Bank-funded Transmission Line Project.

In the past year, the situation in Sindhuli has deteriorated, with repeated incidents of police violence, the arrest and detention of community members, and a campaign of intimidation by the Nepalese authorities to resume construction of the Project and suppress resistance to it.

Re: Intimidation and Militarization in the World Bank Funded Khimti-Dhalkebar Transmission Line Project in Sindhuli, Nepal

We are writing on behalf of communities in the Sindhuli district of Nepal that are affected by the KhimtiDhalkebar 220 kV Transmission Line (the “Project”).¹  Affected communities have been raising their concerns about the impacts of the Project for nearly a decade without adequate or timely response. On July 10, 2015, the World Bank’s Inspection Panel reported to the Board of Director’s that the World Bank violated its Environmental and Social Safeguards (“Safeguards”) in the Project. The Bank’s Management Action Plan to remedy the violations accompanied the Panel’s findings. While the Board endorsed the Management Action Plan, the Board of Directors acknowledged this must be done “with a view to amicably resolving the outstanding issues.”²

Nearly a year has passed since the Panel’s report, but the situation in Sindhuli continues to deteriorate due to Bank Management’s reluctance to take tangible action. In the absence of Bank leadership, Nepalese authorities, including the Project implementing agency, the Nepal Electricity Authority (NEA), are acting with impunity. They are using force to resume construction of the transmission line and a campaign of intimidation to suppress opposition to the Project. The enclosed Briefing Paper provides details about incidents of Project-related police violence and intimidation that occurred in April 2016. Community members were beaten, arrested, and detained while taking part in peaceful protests. Additionally, armed police officers were deployed to guard construction sites, militarizing areas located amidst homes, fields, and schools. Last weekend, on July 2nd and 3rd, community members were again arrested and detained while peacefully protesting the Project.³ In both the April and July 2016 incidents, community members were reportedly detained overnight, without charge, and released the following day after being coerced into signing a document committing not to obstruct the Project.

Recent developments underscore the need for the Bank to act now to avoid being complicit in the ongoing intimidation and militarization in Sindhuli. Project-affected communities seek a peaceful resolution to the conflict that has affected their lives for over a decade. They call on the Bank to take the following actions to remedy Safeguards violations and foster an amicable solution to the conflict:

1. Removal of the Armed Police Force

Communities are urging the Bank to publicly advocate for the removal of the Armed Police Force.  As discussed in the enclosed Briefing Paper, the Nepalese authorities have repeatedly used violence, threats of violence, and other forms of intimidation to force the Project forward. On April 10, 2016, local authorities involved in implementing the NEA Project – including the Chief District Officer and the Superintendent of Police – deployed both the Armed Police Force and local police to resume construction of the transmission line. The police forces dispersed peacefully protesting community members by physically dragging them and beating some with lathis, or long bamboo sticks, on the back, legs, and arms. Several elderly residents and women were injured by the violence.⁴

Subsequently, construction of the Project has continued under the 24-hour watch of Armed Police Force officers at construction sites, located amidst community homes, fields, and schools. Community members express that the presence of these forces is intimidating and is having a chilling effect on their ability to constructively engage with Project personnel. With the legacy of violence in the region, and alleged atrocities associated with the Armed Police Force, the visible deployment of paramilitary forces in communities and near public places is a clear form of oppression designed to instill fear. This is building a negative perception of Bank-funded projects in Nepal, potentially tainting the Bank’s ambitious funding goals in the region.

In order to amicably resolve the conflict, there is a need for the Bank and the NEA to engage in good faith dialogue with communities. Bank Management must urgently initiate and oversee the process of appointing an independent, unbiased facilitator who is mutually agreeable to both the NEA and Projectaffected people. Additionally, since community members are concerned about the health and safety impacts of the transmission line, consultation must include the participation of mutually agreeable experts who can provide independent and credible information and respond to any community questions. The dialogue process should also aim to correct the historical imbalance of power between the Project, affected communities and the NEA.

Affected communities have made multiple requests for participatory dialogue with the NEA to discuss project design and its impacts in a fair and balanced manner. However, their requests have yet to be met, despite findings by the Inspection Panel that “many aspects of the complaint are a clear result of misinformation and lack of adequate communication and consultation,” and that “intermittent and often non-existent engagement further solidified the community’s fears and mistrust.”⁵ This environment of mistrust has contributed to community misunderstanding about the Project and its potential impacts, particularly on health. Such concerns have grown as the NEA and local authorities have refused to take the community’s concerns seriously, with recent acts of violence and intimidation exacerbating an already tense situation.

In May 2016, Bank Management committed to helping facilitate a dialogue between the affected communities and the NEA; however, progress on this has been extremely slow.

3. Suspension of Funding to the Nepalese Authorities Until an Amicable Solution Reached

The World Bank must ensure that the NEA peacefully resolves the conflict with Project-affected communities in Sindhuli and is capable of Safeguards compliance before continuing disbursements on all loans and grants to the NEA and the Ministry of Energy. As this letter has set out, vital to an amicable resolution is the swift withdrawal of the Armed Police Force and demilitarization of Project implementation, and the immediate initiation of a participatory, fair, and transparent dialogue process between the NEA, local authorities, Bank Management, and affected communities. Recent events underscore the need for the Bank to take a strong public position. Anything short of a suspension of funding to the NEA would amount to an endorsement by the Bank of the NEA’s use of intimidation and coercion against communities.

Although Project-affected communities’ requests have been communicated to the Bank over several years, the Bank continues to unequivocally support the NEA publicly. It is public knowledge that the Bank contributed to the creation of the NEA, has a growing investment in the Nepalese hydropower sector, and plans to invest significantly more in the NEA. Bank Management has neglected to provide the strong leadership required to bring the Project back into Safeguards compliance, allowing the NEA to act with impunity. Given the Bank’s involvement in the Project and significant continuing commitment to hydropower development through the NEA, the Bank has a responsibility to use every avenue available to remedy the harm suffered by Project-affected communities, while ensuring that the NEA and local authorities take no further retaliatory action against community members.

This Project provides a unique opportunity to set a positive benchmark for social and environmental standards in the Nepal hydropower sector. Community resistance to future projects and the NEA’s mode of project implementation threaten not only the Bank’s investments, but also their potential to promote shared prosperity in Nepal. The Bank therefore has a critical role to play in resolving the present conflict in Sindhuli, and taking a leadership role in preventing future conflicts by setting positive examples of social and environmental Safeguards compliance.

We urge you to start taking actions to implement communities’ requests immediately. Please do not hesitate to contact us with any questions you may have. Please send correspondence to Shankar Limbu (shankar1database@gmail.com) and Komala Ramachandra (komala@accountabilitycounsel.org). We look forward to your immediate action.

cc World Bank – Board of Directors

1 The Lawyers’ Association for Human Rights of Nepalese Indigenous Peoples (LAHURNIP) and Accountability Counsel are civil society organizations. We have been supporting the complainants in the Inspection Panel process and related follow up. The Khimti-Dhalkebar 220 kV Transmission Line is part of the International Development Association supported Nepal Power Development Project (World Bank Project ID# P043311).

3 While this should not delay the Bank’s response in any manner, we intend to provide the Bank more detailed information about the incident from this weekend, as soon as it becomes available.

4 The Armed Police Force (APF) is a paramilitary force combining elements of both the military and police. The APF is tasked with maintaining law and order, as well as “containing insurgency” and “cracking down [on] terrorist activities.” http://www.apf.gov.np/pages/introduction.

To read more about our work supporting these communities in Nepal, please visit our current case page here.